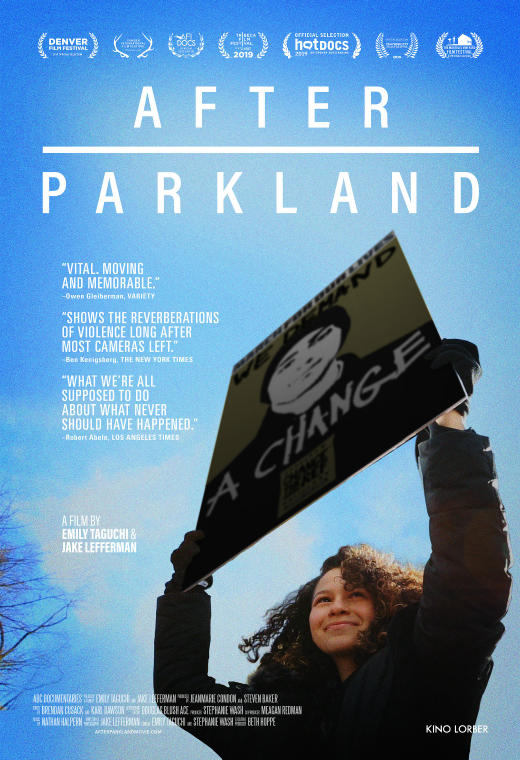 Filmed in the days after the shooting at Marjory Stoneman Douglas High School that killed 17 people, this intimate chronicle weaves together interviews, vérité footage, and personal videos into a moving portrait of one community's crusade to turn tragedy into progress.

In the days after the shooting at Marjory Stoneman Douglas High School in 2018 that killed 17 people and launched a nationwide student movement, filmmakers Emily Taguchi and Jake Lefferman embedded with students and families whose lives were forever transformed. They include senior David Hogg, who recorded his class during the attack and became the face of the Never Again movement; freshman Brooke Harrison, who was in the first classroom under attack; Sam Zeif, a senior who was locked down in the same building, texting with his little brother and unsure if they would ever see each other again; Andrew Pollack, the father of 18-year-old Meadow, who was killed after being shot nine times; and the loved ones of 17-year-old Joaquin Oliver, including his parents Manuel and Patricia, girlfriend Victoria Gonzalez, and best friend Dillon McCooty. The filmmakers developed trusting relationships with these students and families, who opened their doors during some of the most difficult moments of their lives, and followed their private journeys as they rose to challenge the nation to end gun violence. Weaving together candid, in-depth interviews, vérité footage, and personal videos, the film chronicles moments both intimate and defining – from the quiet hours of grief and reflection, to those of political awakening, and onto milestones on the public stage – creating a moving portrait of one community's crusade to turn tragedy into progress.
Host a cinema screening